Nothing much happend this past weekend.  Helped my sister and brother in law move.  He has a seemingly great job as a property manager for Indiana state property.  They now live an a state owned forested area of about 800 acres and their house is dead smack in the middle of it.  Super cool house built in the 60s with floor to ceiling windows outlooking the forest.  Their son Dylan has a really awesome new home and countless acres to explore.  Should be lots of fun for them and the new one coming (Harison).


They gave us a dish washer since they have a new one, and ours went out months ago.  Much appreciated.  I managed to slice my knucle open on the removal process, but a bit of blood some paper towels and a couple bandages, and it seems all right. I thought it was going to need a stich or two at first, but it managed to close up.  Also finished the new dogs fence at our house and got rid of the old raggedy chain link fence... managed to install the dishwasher too.    No work was done in the garage :( but I did sell the old xr100 this past week.  Now I'm on the look out for something... still want an XR100, crf100, or xr100 motard.  I have one in mind, but not sure he wants to sell it.  Ordered a new Takegawa dampend hub for the z50 and a +2" swingarm from http://japan.webike.net/  They keep getting me to order since they keep running free shipping deals.  Saves me a ton and I get awesome parts that aren't available in the States.  The weak US dollar doesn't help much though.  Last week I got a new G-Craft swivel mount intake and a 415mm G-Craft brake rod for Dan's bike. I'm still on the look out for a decent crf50, crf70, or late model Z50 motor for a project too.  That's about it for this past weekend.   I need a new camera.. Oh, and the wife got a new iPhone4s, which is pretty cool if I do say so.
The XR100 I sold.  Made about $150 on the sale. :) 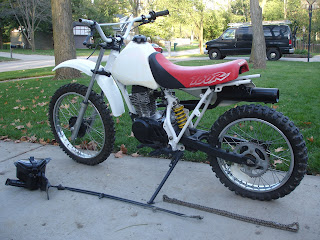 The '79 Honda Z50 that's getting the new Tak hub and swingarm. 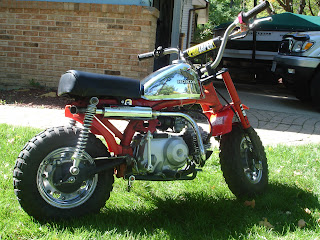 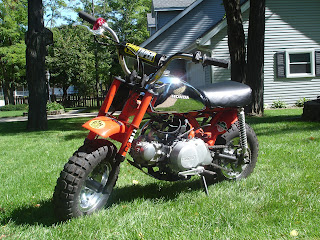 Posted by Christian at 9:25 AM